What to see in Baltic Republics 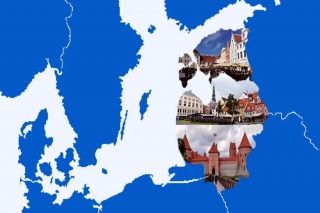 Arriving from Italy or from Europe is quite simple and comfortable, the flag company of the Baltic capitals is Air Baltic, but you can arrive with low cost airlines (such as Ryan air, Easy jet, Vueling, Wizzair and other companies), just as you can get with the flag carriers.

The Time Zone is one hour ahead of Italy.

The climate is very variable, in the summer from June to August the temperature is usually around 25 ° but sometimes even reaches 30 ° in the winter it can even reach -6 ° especially the colder months such as January and February. In the autumn and spring months it often rains, in fact we always recommend bringing an umbrella.

Electricity is exactly like 220 volts in Italy. so both for charging mobile phones, for any tool you can use the socket as in Italy.

There is no common language for all 3 states, each state has its own official language and they are different from each other, the languages ​​are: Lithuanian, Latvian, Estonian. Many speak Russian because of a recent past from belonging to the Soviet Union, the younger ones often do not speak Russian, but many speak German and English.

Telephoning: For those arriving in one of the 3 Baltic republics, they can buy a Sim Card at newsagents or mobile stores that allows you to make calls, use the internet, and receive. The area codes are: Lithuania + 370 Latvia +371 Estonia +372

THE CAPITALS OF THE BALTIC STATES

Vilnius is the capital of Lithuania, a state that borders Poland, Russia (with Kaliningrad), Belarus and Latvia.

Vilnius is washed by the Neris River, founded in 1323 by the Grand Duke of Lithuania Gediminas. Today Vilnius is a city that boasts a beautiful historic center in Baroque style, among other things declared a World Heritage Site by UNESCO.

Must see in Vilnius: We recommend starting with the Old Town, considered one of the most beautiful in Europe, where there are various styles, such as Baroque, Neoclassical, Gothic, and Renaissance. The main squares of the city are two: one is the Cathedral Square, where there is the Cathedral dedicated to Saints Stanislaus and Ladislaus, with the detached bell tower. Inside the church has three naves, inside there is a Baroque style chapel dedicated to San Casimiro. The Town Hall Square Neoclassical-style square, named after the Vilnius Town Hall.

Recommended the visit of the Gediminas Tower is the only remaining Tower of the wooden walls of the 500, the name Gediminas is linked to the Grand Duke of Lithuania and the homonymous King. A few steps from the Tower are the ruins of the Medieval Castle of Vilnius , the Arsenale and the Palace of the Grand Dukes of Lithuania, today famous for the National museum.

The Museum of Genocide A museum built in memory of the Genocide Victims of the 800 and 900 years. It was the old seat of the KGB during the Soviet period, even today, in the basement of the Museum it is possible to visit the Torture chambers and the prisons.

St. Anne's Church in Vilnius Beautiful Gothic-style Cathedral on the outside and Baroque style with one nave on the inside the first building dates back to the end of the 14th century.

The Uzupis district, once considered the Monmantre as in Paris an artistic area where intellectuals and artists still live today.


Must See in Vilnius surroundings: Kaunas Old Capital of Lithuania, worth a visit. The Hill of Crosses A real pilgrimage site and at the same time of Lithuanian nationalism, with more than 100,000 crosses.

Trakai Castle: Beautiful Castle built between the XIV and XV Centuries. From the Grand Duke of Lithuania, surrounded by greenery and built in a lake, we recommend visiting the inside of the Castle.

The Rundale Palace: Baroque and Rococo architecture of exceptional beauty. Designed by Francesco Bartolomeo Rastrelli, built in 1736 as a summer residence for the Duke of Courlandia.

Riga is the capital of Latvia (about 700,000 inhabitants), a state that borders Lithuania, Belarus, Russia, and Estonia.

Riga is located on the Baltic Sea and on the mouth of the Daugava River, was founded by a German bishop in 1201.

what we recommend to see in Riga: undoubtedly the historical center considered by many to be the most beautiful of the three Baltic capitals, with various styles including medieval and art nouveau.

Riga Cathedral, built in 1211 is the most important Protestant Cathedral in Latvia, inside there is the organ considered to be one of the oldest in Europe

Town Hall Square where the symbol of the City of Riga is located the House of the Blackheads built in 1300 to be restored in 1800, was completely destroyed during the Second World War, today it has been rebuilt exactly as it was. Also worth seeing is the Statue of Roland (located in the center of the square)

The Church of San Pietro, in Gothic-Baltic style, the highest in Europe to climb to the top is to see a beautiful panorama.

Riga Castle Built in 1300 and completely rebuilt in the 19th century. Today it is the residence of the Latvian President, and it is also the Museum of Arts and the National Museum of Latvian History.

The Three Brothers are 3 nearby colored houses, the first built in medieval style and the others in Baroque style.

The Swedish Gate is the only gate left that gave access to the Old City.

Powder Tower: it was one of the towers of the city wall, then it was used as a gunpowder deposit. Today it is the war museum, from the First World War to the independence of Lithuania.

Open-air Ethnographic Museum, an open-air museum with 128 wooden houses representing the traditional life of the Latvian people is very interesting.

Tallinn is the capital of Estonia city on the Baltic Sea. Estonia borders Russia, Latvia and Finland, is located just 80 km from Helsinki, the Baltic Sea divides the two states.

The medieval old town is beautiful and has become a UNESCO World Heritage Site.

What we recommend to visit in Tallinn:
Piazza Raekoja or Piazza Municipio famous square in addition to the beauty of the colorful houses around the square takes its name from the town hall, the only Gothic-style palace in northern Europe built in 1248.

The Passage of St. Catherine a narrow street in Tallinn where the thrill of going back in time, a street with characteristic clubs, craft shops.

The walls of Tallinn Very beautiful this area where many towers are typical local, in the area there is also a craft market where they mainly sell woolen clothes.

The Church of San Nicola Built in the XII century. dedicated to San Nicola di Bari, rebuilt several times today it houses a museum of religious art and is also an auditorium.

The Toompea Hill in Tallinn, with its beautiful panorama

The Cathedral of Aleksandr Nevskiy typical Orthodox church dedicated to Aleksander Nevsky Prince of Novgorod, inside which you can admire the beautiful icons.

Kadriorg, Famous Park where the Palace that was built by Tsar Peter the Great is located, a very nice park with ponds, flower beds, trees.

The Convent of Santa Brigida Of the old convent built in 1400 only the façade remains, the convent was destroyed during the Livona war.