SAINT PETERSBURG: City founded by Tsar Peter the Great, his will was to open an outlet to Europe. Founded in May 1703 on the Baltic sea where the Neva river flows, the Tsar gave the name to the city from its patron saint, the apostle Peter. The first name was Sankt Peter Burhk from Dutch, he was a nut in Dutch because the Tsar had studied and lived in Holland. 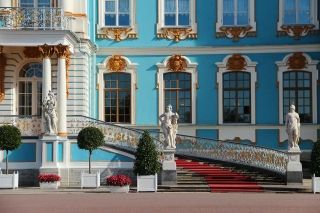 SAINT PETERSBURG: The City founded by Tsar Peter the Great, his will was to open a window to Europe. Founded in May 1703 on the Baltic sea where the Neva river flows, the Tsar gave the name to the city from its patron saint, the apostle Peter. The first name was Sankt Peter Burhk from Dutch, he was mad about Dutch because the Tsar had studied and lived in Holland. St. Petersburg was built by the will of Peter the Great, on the delta of the Neva river which is a navigable river. In fact, the goal of Peter the Great was to have a city that had a window to Europe and St. Petersburg had it via the Baltic Sea.

The real highlight of the city is the HERMITAGE MUSEUM, today the largest museum in the world (it is said that to visit it all by dedicating a minute per piece takes 8 years). The Hermitage, built by the architect Rastrelli in baroque style, was for over 200 years a winter residence of the Tsars. St. Petersburg is a city waiting to be discovered. Turistically speaking, it offers many monuments, palaces, museums, cathedrals, residences in the time of the Tsars.

- The Palace Square, located between the Hermitage and Nevsky Prospect is one of the main squares in St. Petersburg. The square was designed by the Italian architect Carlo Rossi, in the center of the square there is the Column of Alexander (dedicated to Tsar Alexander I on the occasion of the victory over Napoleon).

- St. Isaac's Cathedral, built in neoclassical style, today is one of the symbols of St. Petersburg. The Cathedral built by the French architect Auguste Montferrand by order of Tsar Alexander I, has a golden dome of about 22 meters, from the dome you can admire the city and the Gulf of Finland. In the center of the square of the same name where the Cathedral is located you can see the monument of Tsar Nicolai I.

- Nevsky Prospect: it is the main street of St. Petersburg designed in the eighteenth century. Initially it was called "road to Nevsky Monastery", after some time the name was changes to "road of 25 October" in the Soviet era, after that it was definitively called Nevsky Prospect. Today it is the heart of the city. Here you can visit the Kazan Cathedral, the book house (in 1902 it was purchased by the SINGER company), Eliseiev emporium, the beautiful Art Nouveau interior, and much more between bridges, palaces that are lit up in the evening and make Nevsky Prospect a beautiful way.

- The Kazan Cathedral: built in the Neoclassical style in the early 1800s, the Cathedral was dedicated to Our Lady of Kazan, one of the most revered in the Russian World. During the war against Napoleon the Commander of the Russian army Kutuzov prayed to the Madonna of Kazan , in fact after the war on the French the celebrations for the Victory took place right there. Today the Cathedral is a church where many faithful go in devotion to Our Lady of Kazan.

- The State Russian Museum: The largest Museum of Russian Art in the World, formerly known as the Russian Museum of his imperial Majest Alexander III, was in fact inaugurated at the end of the 19th century by his son Nicolai II to commemorate his Father Alexander III. Today the museum contains a collection of about 400,000 pieces including: icons, paintings, folklore, decorations, etc. We recommend to all art lovers to visit the Russian Museum.

- The Cathedral of the Savior on Spilled Blood: One of the symbols of the City was the Cathedral. It was built in 1883 by Alexander III in memory of Father Alexander II assassinated in that place by an attack. The Church compared to the others which are often in neoclassical or Baroque style is in Medieval Russian architecture, similar to the Saint Basil's Cathedral in Moscow. Inside there are about 7,000 square meters of mosaics of superlative beauty. A must see for anyone in St. Petersburg.

- The Peter and Paul Fortress: The first structure was built in the City in 1703, on the order of Peter the Great, and was the project by Domenico Trezzini. The fortress was built as a Citadel, in a strategic point of the Neva River, to defend against possible enemy attacks. Inside the fortress there is the Peter and Paul Cathedral where the remains of the Tsars are located inside. Today the fortress is a real museum of the history of the city of St. Petersburg.

- The Mariinsky Theatre: The Mariinsky Theater is one of the most famous theaters in Russia, built in the mid-19th century. It owes its name to Princess Maria Aleksandrovna. Works and Ballets are represented, it has the reputation of being the premier theater. You can see performances such as: the Lady of Spades, the Sleeping Beauty, the Nutcracker and the Swan Lake.

- The Rostrate Columns: 32 meters high, built at the beginning of the 19th century, they served as lighthouses, at the bottom there are real sculptures, which represent the prow of the captured enemy ships at the base of the 2 columns. The statues represent the 4 largest rivers in Russia, Volga, Neva, Volkhov, Dnieper. In front of the Hermitage with a beautiful view, today it is one of the most beautiful places to take souvenir photos with a wonderful view of the Neva and the Winter Palace.

- The Drawbridges: The drawbridges are a real characteristic and tourist attraction of the City of St. Petersburg. In the spring / summer around 01.45 at night (approximately) they are opened to let the Navigation pass. Coming from the Baltic they cross the Neva river. We recommend everyone to take a night excursion and stop to see the bridges to open.

- The cruiser Aurora: It was launched in the 19th century, it took part in various important missions. It was one of the first ships to Rescue the City of Messina when it was hit by a devastating earthquake in 1908 during the First World War. In 1917 during the October revolution he gave the signal, with a shot, for the taking of the Winter Palace by the Revolutionaries. Immediately after the Second World War it was restored and anchored. Today it is a floating museum.

- Marsovo Polye (Campo di Marte): A vast expanse with various avenues and paths that allow you to make beautiful walks, in the center of the field there is a granite monument dedicated to the fallen, there is the Eternal flame.

- The Yusopov Palace: A beautiful palace that belonged to the Yusopov Family, a very wealthy family from St. Petersburg, the Palace is famous for the Death of Rasputin (one of the most mysterious stories in the history of Russia). The visit of the Palace allows you to see the various rooms very rich with beautiful chandeliers, paintings and pieces of art, as well as a visit to the beautiful theater.

- The Catherine Palace: It was the summer residence of the Tsars, the work officially began in 1717 on behalf of Tsarina Catherine I, the Palace was rebuilt more than once, in 1752 the daughter Elizabeth asked the architect Rastrelli to rebuild the building in a Rococo style making it much more beautiful. Just to decorate the Palace, more than 100 kg of gold was used. The Palace is famous for its Amber room, a 55 square meter room completely covered with amber.

- The Pavlovsk Royal Palace: Named after the City of Pavlovsk, in 1777 Tsarina Catherine II assigned her son Paolo a large plot of land, where a palace in the Neoclassical style was built. The visit of the Palace and also of the park is very interesting.

USADBA BOGOSLOVKA (LENINGRADO - SAINT PETERSBURG REGION)
In the Leningrad region a few kilometers from St. Petersburg on the banks of the Neva river, an Ethnographic Museum was born, where the creators of the Park re-evaluated after having restored the masterpieces of wooden architecture typical of northern Russia. In reality it has a long history in 1746 Elizabeth I gave her confessor the archpriest Fyodor Yakovlevich Dubyansky a vast piece of land on the banks of the Neva River. In 2004 they developed a project for the restoration of the Zinovyevo estate within the new Ethnographic park "Usadba Bogoslovka". During the reconstruction works, the manor, the pavilions and the annexes were recreated. In 2018 the restoration of the Church of the Intercession of the Madonna was completed, the church is a real masterpiece of wooden architecture, which remembers externally the famous Kizhi Cathedral in Karelia