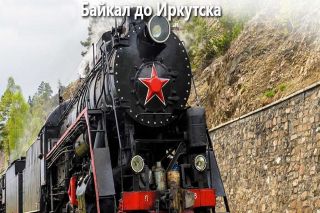 Exit at the following stops:

Tour of the main and largest station of the Circum-Baikal railway. All the main structures of the station were built at the beginning of the last century according to special projects. The most famous architectural masterpieces are the station lined with local white and pink marble and the pond, made in Art Nouveau style with Gothic motifs.

Excursion with an inspection of the engineering structures of the Angasol complex: a reinforced concrete bridge of the second stage, a metal bridge of the first stage, a viaduct, a tunnel and retaining walls.

Excursion through tunnels n. 18 and n. 18-bis, you will see the of the lower arch containment wall. This tunnel is a complex architectural structure. A powerful and fast Kirkirey river flowed over its part of Irkutsk. To hijack it, an unusual construction was created for those times - an aqueduct - a drainage system, built on the tunnel.

Tour of two neighboring complexes. The first includes Cape Shumikhinsky with a tunnel and a bay, a sandy beach and a stone tube on the river. The second consists of engineering structures: a bridge, a viaduct, a gallery and retaining walls. One of the walls - arched, called "Italian" (built with the participation of masters from Italy) - the only one preserved in its original form.

Visit to the Circum-Baikal Railway Museum in the restored station building.

Crossing to Listvyanka, boarding on buses.

WE RECOMMEND TO BRING WITH YOU:

Included in the cost:

round trip from Irkutsk-Passenger station to Port Baikal station;
ferry from Baikal port to Listvyanka village;
bus transfer from Listvyanka to Irkutsk;
excursion service according to the program. (excursions are in Russian guide, but on request we can add a guide or an interpreter in other languages for a supplement)