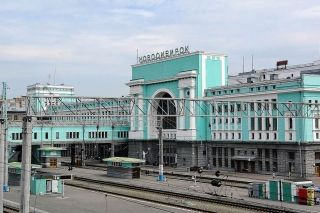 Full day tour of Akademgorodok and Novosibirsk with lunch in a typical Taiga restaurant (8 hours): 10:00 - 18:00

The scientific city Akademgorodok, located 30 km from Novosibirsk, is the only scientific city in the world, where all branches of science are represented. For this reason, it is sometimes called "the scientific Vatican" by the western media. In Akademgorodok the Lavrentiev Prospekt street is marked by the Guinness Book of Records as "the most scientific road in the world". the Ob river basin, called Ob Sea by the locals. You will discover the history of this city and visit a museum of your choice: Archaeological Museum of the Institute of Archeology and Ethnography (closed Saturday and Sunday) / Geological Museum of the Institute of Geology and Geophysics (closed Saturday and Sunday); Open-air train museum with a huge collection of Soviet locomotives and railway carriages (closed on Mon).

Upon returning to Novosibirsk, lunch in the restaurant of the Taiga cuisine where you can try the famous maral steak. In the afternoon, city tour, which covers all the main attractions of the city: the Novosibirsk railway station, the largest station of the Trans-Siberian railway; Krasny Prospekt street, the longest straight road in the world (7km / 4.4 miles); Lenin Square, the city center with the second largest Opera House in the world (after that of Buenos Aires); Old wooden houses on Gorkogo Str., The oldest part of the city; The chapel of San Nicola, which marks the geographical center of the former Russian empire; Embankment of the 7th longest river in the world (the Ob River); Colorful Siberian fruit and vegetable market.