During this excursion you will discover the Soviet era in Russia in St. Petersburg. You will travel through the times of Stalin, Krushev and Brezhnev, you will see the contrast between past and present. The excursion ends with a cozy tea in the apartment of a Russian family. 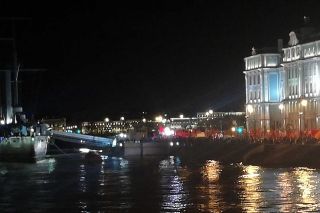 The Communist Party was a union of workers and peasants, i.e. representatives of industry (a hammer) and agriculture (a sickle). Red was the main color of the Soviets, it meant "flame" - the color of the struggle.

The USSR flag, the pioneers' tie, the stars on the medals were red.

The Soviet flag of the USSR founded in 1922 and included only 4 republics: Russia, Ukraine, Belarus and the Caucasus Republics (Armenia, Georgia and Azerbajan).

Later Latvia, Lithuania, Estonia, Kazakhstan, Uzbekistan and others belonged to the Soviet Union.

The USSR is not only the communist party and the KGB, but also:
- October badge; Lenin rooms; pioneering ties; forays into the collection of paper and metal at school;
- Soviet propaganda in art, literature, science, radio and TV;
- types of condominiums of Stalin, Brezhnev and Khrushev;
- Millions of jokes about Brezhnev;
- Perestroika and anti-alcoholic campaign of Gorbachev;
- A lot of red and black caviar, but little milk and meat in the shops;
- Streets of Lenin in every city and town in the country;
- Shipments in space;
- Soviet cars, audio and video equipment;
- pseudo-equal rights and opportunities;
- True patriotism, brotherhood and sincere pride for the success of the country in some areas of life;
- Stability and trust in the future.