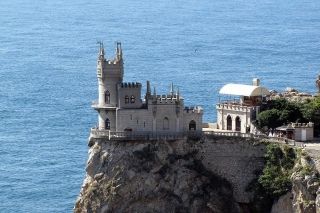 2nd DAY Breakfast. A visit to Sudak via Koktebel (an excursion by car). A visit to the MA Museum in Koktebel. Voloshin, a famous Russian poet, philosopher, translator. Transfer to Sudak. Visit to the fortress of Sudak (Genoese). Walking along the Tsar’s path. Optional (optional, at extra cost) – tasting of Crimean sparkling wines in the Nový Svet champagne factory – from 10.00 euros per person. Going back to the hotel. Dinner.

3rd DAY Breakfast. Departure for Alushta. A sightseeing tour along the way. A tour to the old factory cellars (tasting of wines of “Sun Valley”). Continuation of the bus excursion along the Sudak motorway. The path is “circular” and its perimeter extends over almost half of the territory of the valley of Alushta, which allows to see a beautiful view of the neighborhoods, mountains, watersheds provided by the different angles and to make stops in places worthy of note (Nicholas lighthouse temple). Stop in the village of General. A visit to the waterfall of the Crimean Jur-Jur mountains. Transfer to Alushta. Check in at the hotel. Dinner.

4th DAY Breakfast. Excursion to the historic center of Yalta with a visit to “the white summer residence” – Chekhov’s house. In a relatively short time of his life at Yalta, the writer has written well-known and beloved works such as “The Lady with the Dog”, “The Cherry Garden”, “Three Sisters” and others. Transfer to Livadia. A tour visit to the Livadia Palace – a summer residence of Emperor Nicholas II and his family. The Palazzo di Livadia is one of the main monuments of the architectural and park art. Transfer to Ay-Petri plateau. A walking tour along the “teeth” of Ai-Petri. This mountain massif has long been one of the most recognizable landmarks on the southern coast, and from there you will have a breathtaking view of the Big Yalta. On request, for a fee – a visit to Speleology on the ice / Yalta / GS. Going back to the hotel. Spare time. Dinner.

5th DAY Breakfast. Departure for Massandra. A visit to the palace of emperor Alexander III (Massandra Palace). The palace has a rich architectural decoration (the era of awakening), and the interiors preserve the memory of the aristocracy era. Optional, for a fee – tasting and excursion to the Massandra winery – the advanced enterprise of the Crimean winemaking industry – from 15.00 euros per person. Driving to the Swallow’s Nest and overview of the main landmark of the Crimea. Transfer to Alupka. A visit to the Vorontsov park in Alupka. Optional for an additional payment – a tourist visit to the Vorontsov Palace – from 8.00 euros per person. Moving to Sevastopol, stopping at the scenic Laspinsky Pass, Foros Church and Baydarskie Gates on the way. Checking in at the hotel. Dinner

6th DAY Breakfast. Transfer to Nakhimov square. A guided tour through the historic center: Quay del Conte, Primorsky Boulevard, Nakhimov monuments, sunken ships, Kazarskyi monument. Transfer to Balaklava. Upon arrival visit the Balaklava underground museum complex – a top secret of Cold War facilities, performing functions to repair underwater boats. Walking up along the hill to the fortress for the Genoese ruins. Tasting and excursion to the Champagne wine factory “TerruART” of the enterprise “Golden Beam”. TerruART – a unique platform for the Crimea, where every tourist will try a professional tasting – wine, gastronomy and art, during which the 5 senses will be challenged: sight, hearing, taste, smell and touch. Going back to the hotel. Dinner.

7th DAY Breakfast. Checking out. Departure to Bakhchisaray. Sightseeing on the way to Bakhchisaray, visiting Khan’s palace, the residence of the Crimean Khans and the only example of Crimean Tatar palace architecture. A visit to the Maryam-Dere tract. True coffee and sweet Crimean Tatars in an authentic bar. A walking tour, with ascent to the medieval town of Chufut-Kale. On the way, a visit of the monastery of the cave of Santa Assunta, which was founded long before the appearance of Bakhchisaray. Excursion to the secret well Tik-Kuyu – discovered by the Crimean speleologists between the 20th and 21st centuries. Until now, there is no precise information on the discovery. End of the tour program. Transfer to Simferopol airport. Departure.

THE FEE INCLUDES: – Accommodation in 2-3 bed rooms with all the comforts in the room (2 nights in Feodosia, 2 nights on the southern coast of Crimea, 2 nights in Sevastopol). – Meals: breakfast – Transport service + guide-interpreter (Italian) for the whole journey. – Excursion service. Entrance tickets for the sites. – Insurance for the period of the tour.
THE PRICE DOES NOT INCLUDE: – Flight. – Lunches and dinners. – Optional excursions, – Personal expenses.

NOTE: The tour operator reserves the right to change the order of visits.