The history of the Far East is closely connected with the native population of the area, which inhabits lands near the Amur River, the Okhotsk sea coast and the Pacific Ocean. 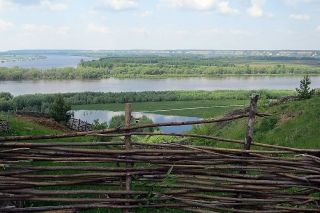 The history of the Far East is closely connected with the native population of the area, which inhabits lands near the Amur River, the Okhotsk sea coast and the Pacific Ocean. During this intense tour, you will have the opportunity to get to know the ethnic minority called the Nanai people better. The name of the village Sikachi-Alyan is said to derive from two words of Nanai: "ask" and "border between the worlds of the living and the dead". However, the village population is very much alive with around 300 ethnic Dwarfs, who mainly make agriculture and produce souvenirs.

Be sure to wear comfortable shoes, as you will explore petroglyphs - rock carvings from the 13th century BC. There are about 300 pictures of masks, animals, pictures similar to men and birds. Some of the petroglyphs have not yet been interpreted. It is a mystery that petroglyphs depict flamingos, tarpans, buffaloes, which do not exist in this region today and that skeletons have never been found in this region!

You will visit a small Nanaj cultural museum located in a local school, photographed in the traditional costumes of Nanai, visit a local Nanai family and taste their traditional dishes, observe the processing of fish skin, wood carving, embroidery and listen to the popular music of Nanai. You will also have the opportunity to shop for souvenirs and have lunch on site.

Return to Khabarovsk to visit the most remarkable places of the city: the Muraviev-Amurskiy street (the main street of the city), the Lenin square, the Komsomolskaya square with the cathedral and the regional park, and the Amur Cliff observation point. dinner, after dinner transfer to hotel or railway station